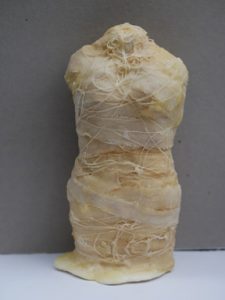 About Jeanne-Claude from Wikipedia

Their works include the wrapping of the Reichstag in Berlin and the Pont-Neuf bridge in Paris, the 24-mile (39 km)-long artwork called Running Fence in Sonoma and Marin counties in California, and The Gates in New York City’s Central Park.

Although their work is visually impressive and often controversial as a result of its scale, the artists have repeatedly denied that their projects contain any deeper meaning than their immediate aesthetic impact. The purpose of their art, they contend, is simply to create works of art for joy and beauty and to create new ways of seeing familiar landscapes. Art critic David Bourdon has described Christo’s wrappings as a “revelation through concealment.”[3] To his critics Christo replies, “I am an artist, and I have to have courage … Do you know that I don’t have any artworks that exist? They all go away when they’re finished. Only the preparatory drawings, and collages are left, giving my works an almost legendary character. I think it takes much greater courage to create things to be gone than to create things that will remain.”

Houston on my mind

Houston on my Mind 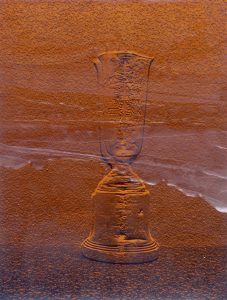 This video is from the Women Beyond Borders Project. Nashville and the Frist Center for the Visual Arts were one of the locations invited to participate.

Even though the video was created in 2003, my comments are valid today. In the clip I describe some of the elements that informed the creation of Present. The same unmasking of buried experiences applies to any of my artwork.

I hope that you find it informative. 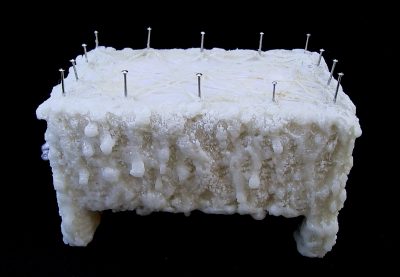 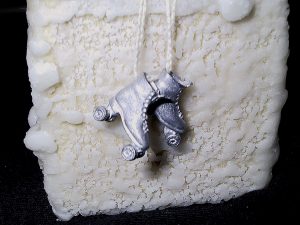 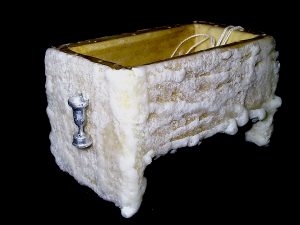 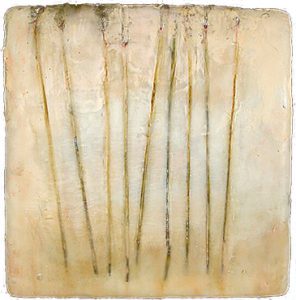 The 2017 Total Solar Eclipse is over.
Hope you experienced it!
If you missed it, the next solar eclipse is in 2024. See you then.

The Eclipse is Coming 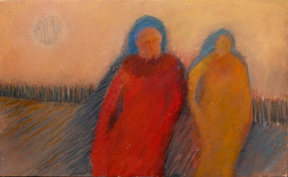 On August 21, 2017, the biggest celestial event of my lifetime is predicted to happen. Of course I am referring to the Total Eclipse. Forecasters believe that its path will make broad arc over the entire United States. My town, Nashville, Tennessee, is one of the few places expected to experience a lengthy view of the eclipse.
Lucky us!
While this painting isn’t an image of an eclipse, it does show a feature that we humans depend upon, moonlight. When the moon is full, it can shed light on the darkness around us. Will the moon be dark when it passes in front of the sun on August 21st?

August is a Fiery Month 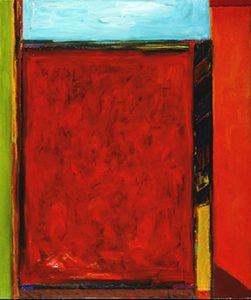 August is a fiery month. The colors red and orange are indications of danger or even of power. Warming and threatening at the same time.

Exit Answers was painted in late summer, 1992, before I headed to Santa Fe Art Institute for a one-month residency with Nathan Oliveira. I was excited and terrified all at once.

What do these colors say to you? 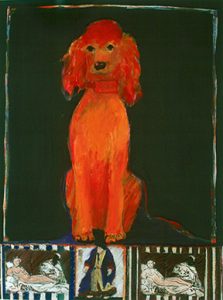 Summer time is here, and it is HOT.  Many years ago in the heat of July, I painted this work on paper. It was first exhibited in a show entitled Hotter Than July.

Zola was our first Standard poodle. Here she is wearing a collar with her name on it. Her leash dangles beside her. Along the lower section of the painting are two reproductions of Olympia, painted in 1863 by my favorite artist, Edouard Manet. I recreated his work with an E-Z cut block.He is a 19th century French painter, sometimes credited with being the founder of Impressionism.

Also, at the bottom of the painting is a copy of a samurai figure. Both the samurai and Olympia are pictured in another one of Manet’s paintings, titled Portrait of Emile Zola. Japanese woodcuts were all the rage at that time.

This was my first “Zola” painting in a series of about 50 works. 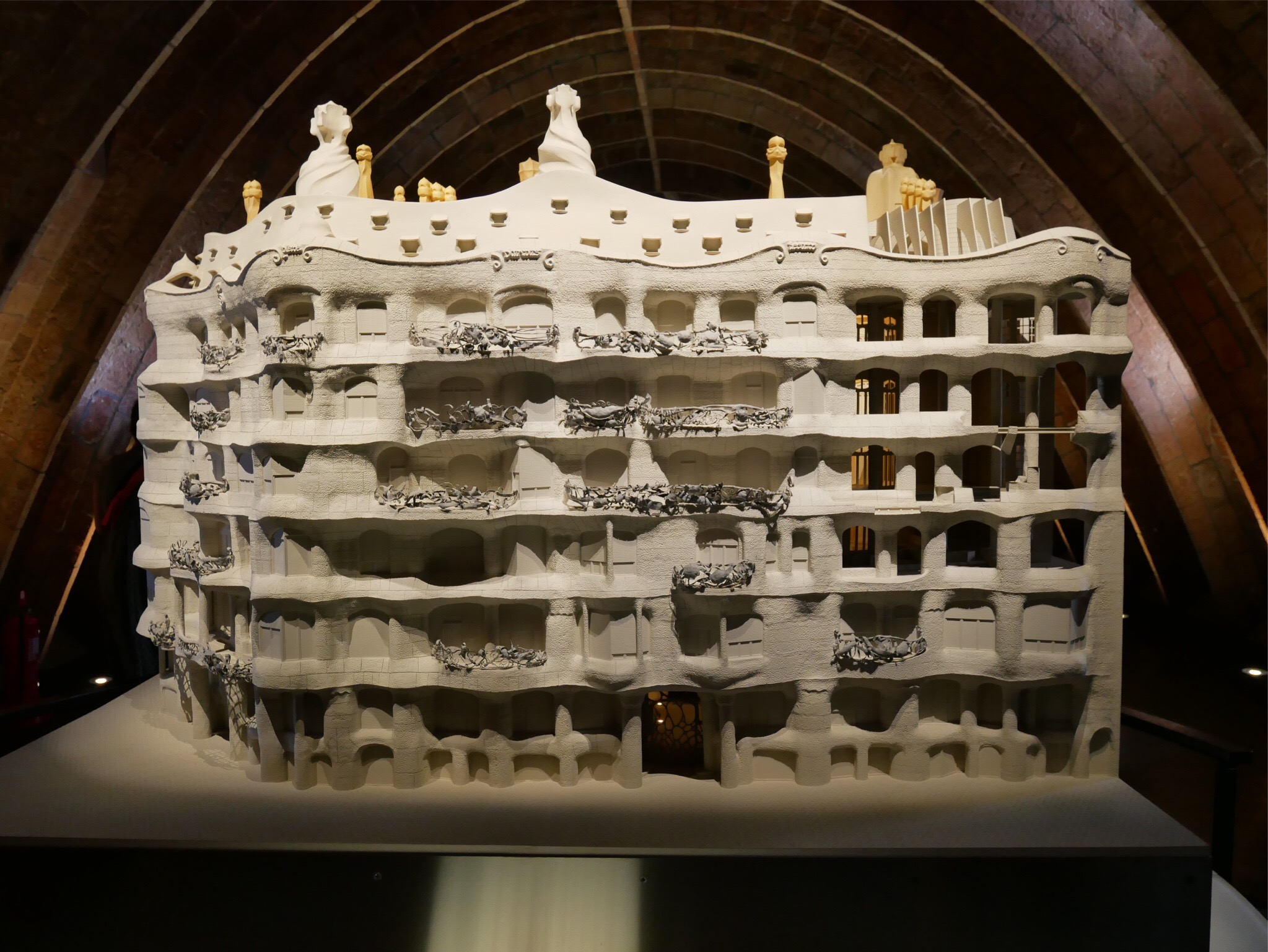 Model of the Casa Mila, a private residence, designed by Antoni Gaudi. Curving facades, ironwork like vines, mosaic surfaces. It’s the opposite of the straight lines of contemporary architecture. 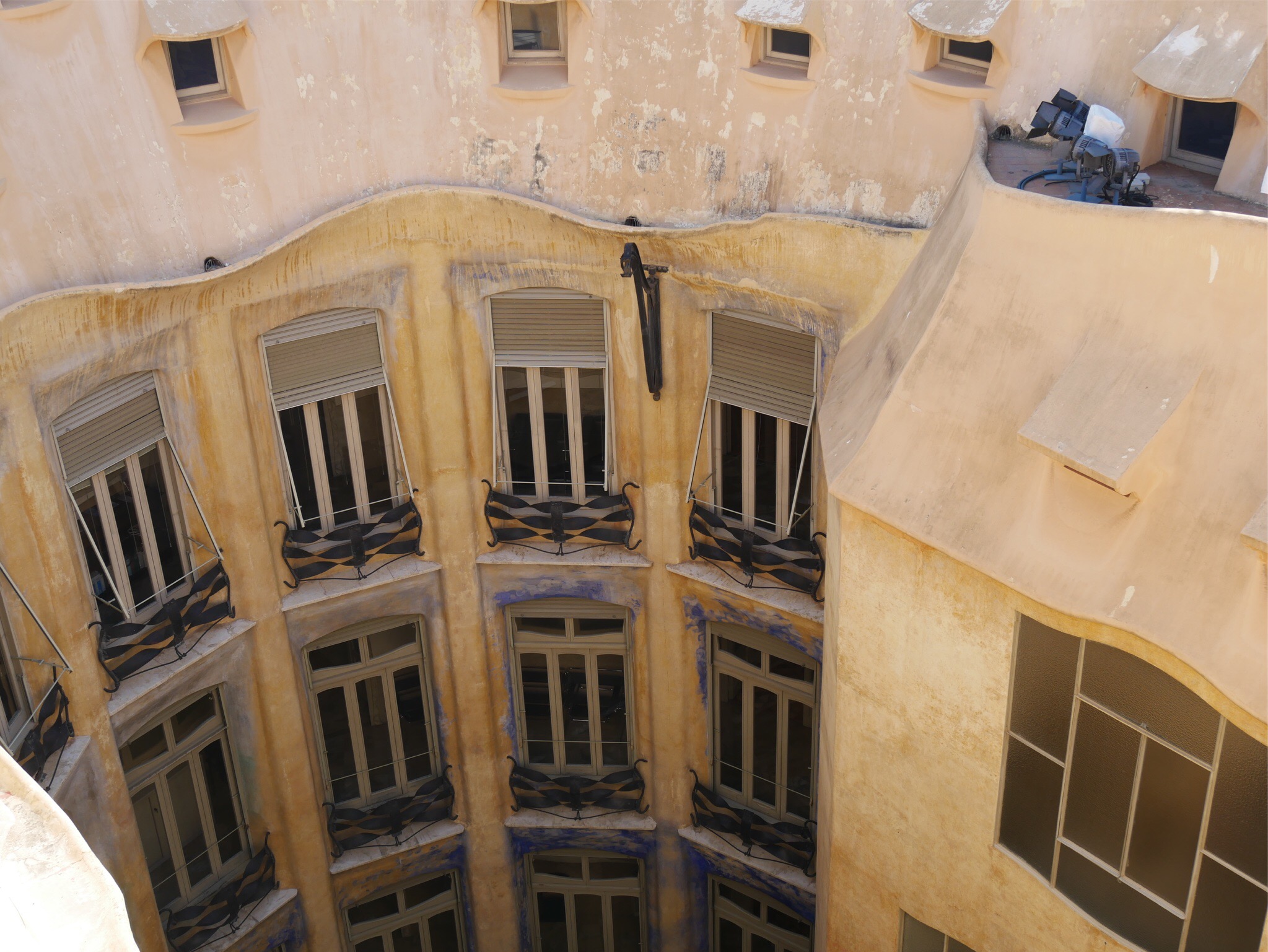 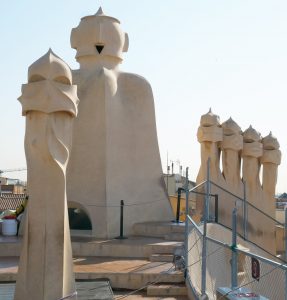 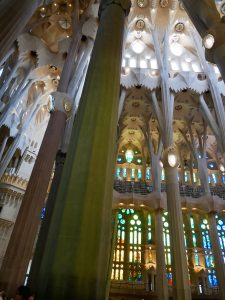 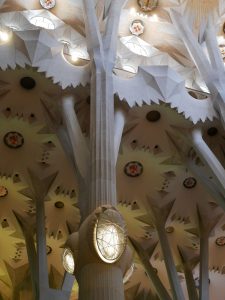 On a recent trip to Barcelona, I visited Antoni Gaudi‘s La Sagrada Familia. It has been under construction for decades. Part of the interior is finished enough to open for a mass this summer.

Gaudi’s church is on UNESCO’s World Heritage List, along with many of his other  projects.

The basilica itself is a breathtaking experience, from the soaring ceilings to the stained glass windows. The reflections from the windows cast a colorful glow on the ceiling. The colors change with the time of day. 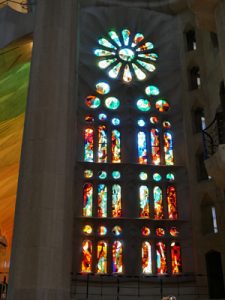 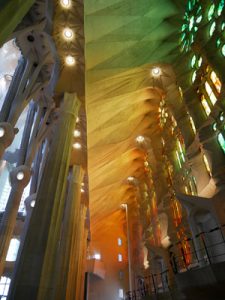 La Sagrada Familia is scheduled to be complete in  2026 to coincide with the anniversary of the architect’s death. 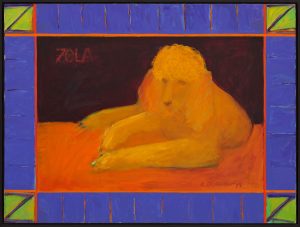 I am pleased to announce that I have been chosen to exhibit my work from March 2016 to June 2016 at the Nashville International Airport in the Flying Solo Series  Selected from the Zola series, Mighty, Mighty Zola brings together a number of paintings from the 1990’s.